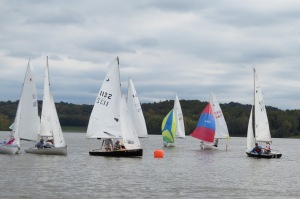 New to sailing, Sweet Keegan Grange asking Zaugg….”why don’t you worry a little more about your own trim problems…?

Halloween Classic pictures are in – complete with commentary from Marion:

The 2013 Chili Bowl came a few weeks early this year as there were some scheduling conflicts and worries about the weather later in the year.

PRO Joe Volter gathered a host of volunteers to run five solid races.  In past years the wind has started out as non-existent or a good breeze.  This year’s wind was much like 2012 where the wind started out moderate and developed into a moderate sea breeze you could do some hiking in.

The racing left some questions answered and others not.  As the wind was from the Northeast and the course set near shore, many of the racers asked themselves whether the famous “Righty Breakwall Effect” might be the game plan for tacking to port right away.

Some folks just had mechanical issues.  For instance, Charlie Bark in #1137 probably wished he had paid more attention when his fiancée Megan McIntyre asked whether the centerboard looked right.  Well, with the centerboard off the pin and all the way back, it was probably nice for #1137 to just make it around the race course.

Ernie Michaud in #1136 welcomed the boat’s previous owner Jim Hermetet as crew and eked out a third place finish over Seth Parker and crew Joe Minerd in #1076.  Joe had Seth sailing the boat great and many times they were up at the top of the pack.  However, at the start of the fourth race with all of the boats up on the line, both Ernie’s #1136 and Seth’s #1076 jumped the gun a bit early and neither went back to restart or didn’t go back entirely across the start line to properly restart.  If Seth had restarted, he would have gone home with third place honors.

And in the third race the entire fleet had to ask about this “Righty Breakwall Effect.”  Dave and Sue Michos in #1157 were over early but resisted the temptation to bang either the right or left side and sailed the shifts, resulting in a come-back win with the largest margin of victory of the day.

A last question came in the last race.  Marion Zaugg in #1132 invited local phenom Heidi Juratic (sp?) to crew.  In 2011 they had waxed the competition, winning each race by comfortable margins.  This year was different and they needed a win in the last race against #1157 plus a little help.  Could they pull it out?

Race #5 was the only time #1132 and #1157 sailed neck and neck with #1132 sailing the last upwind a boat-length faster on starboard tack and #1157 sailing a couple of boat lengths faster on port tack.  Marion and Heidi rounded the last upwind a couple of boat-lengths behind #1157 but managed to get inside and leeward to get the win.  With the premature starters in race #4 they finished a point behind the Michos team to wrap up second-place.

For #1157, the regatta answered many questions because it was the boat’s first Ohio regatta victory after nice showings at the 2012 Nationals, 2012 Chili Bowl and the 2013 Southern Comfort Classic.  Yes, the boat is dialed in.

The Chili Bowl usually concludes with a chili cook-off but the early date made Chili seem a bit too hot but competitors enjoyed a feast of hot dogs and beer.  Ernie Michaud went home winner of the “Hot-Diggity Dog” contest for the best hot dog topping.

The 2014 Jet-14 Nationals will be hosted by Mayfield YC in the beautiful Adirondacks of New York.  Mayfield, one of the newer fleets in the class, held their first Nationals just 4 years ago and it was a resounding success.  Dave Japikse, Dean Whalen, Dan Lehane and gang know how to put on a great event.  Some may also recall the introduction of Barbehenn‘s “The Green” right before the 2009 board meeting, resulting in an unfortunate loss of control by several board members.  Look for an announcement with dates soon!

Jet #438, with the full-on mahogony everything, is available for a very reasonable price.  Owner Mary Beth Paul wrote in the other week about the Jet in her front yard:

I have a beautiful mahogany Jet ’14 on a trailer in my back yard. Her mast and boom are also mahogany. We have her original sail with the red number 14 and jet on the fabric. My husband found and restored her here in Massaschusetts about 20 years ago.

A few North Carolina Jetters made the trip to Asheville a couple of Sundays ago to participate in the first Jet-14 vs. Flying Scot Challenge.  Fleet Captain Hennon had to call in a few ringers, including Tom Grace and Paula Pacheco (Lake Norman YC), Barry Saunders and Todd Ochoa (Carolina Sailing Club), and newcomer Jackson Harris (CSC).  The Jet fleet met for dinner and drinks the night before and apparently had too many, as Barry arrived the next morning looking like he just came out of a coma and Tom and Paula showed up about 5 minutes before the start and then nearly fell out of their boat.  Grace/Pacheco then went out in Race 1 and took a solid 13th out of 14 boats to post the FS fleet to a 1-0 series lead.  However, they (two firsts) and the 7-boat Jet fleet rallied in the final two races to take down the team regatta trophy.  All agreed that it was a fantastic event, and we plan to do it again next fall.  Scores:

Even better than the event itself was the prospects it generated for the future.  David Betts drove all the way from Chapel Hill just to pick up Jet-14 #19, which he will be restoring over the next year.  Also, Jackson Harris had such a good time that he is getting his own Jet-14 to fix up over the winter and to sail with us next year!  Finally, also coming on line next year with a Jet restoration of his own is Jerry Harwood from New Bern, NC.  Can’t wait!

Trying to Get Rid of Some Sails?

Barry Saunders is looking to upgrade his sails on #962.  Shoot him a message if you have any.

It’s not too early to start thinking about next year.  We will once again host a spring regatta on Lake Julian near Asheville, NC.  This year we will be expecting several new boats from NC as well as some out of town travelers.  With the great spring wind and southern Barb-Q, this is a can’t miss event.  Dave and Sue Michos will look to defend for the second straight year.

Jet-14 Class on the Internet

Did you know that our class has a Facebook page? https://www.facebook.com/groups/65507183048/
Or a Twitter handle? https://twitter.com/Jet14Sailing
And a bunch of photos from the past years here: http://jet14.smugmug.com/
And of course our webpage: http://www.jet14.com

That’s it for now…
Chris