Registration is now open for the first Jet-14 regatta of the season.  I hope you will all join us in Asheville for what has always turned out to be a fun event.  Register online by April 19 to get $5 off the $75 entry fee.  Registration includes two lunches, breakfast, BBQ dinner, drinks, and awards for skipper and crew.

http://www.regattanetwork.com/event/18575
Note that class membership is required to participate!  Please take 5 minutes and renew online:
https://jet14.com/membership
Hope to see you in beautiful Asheville – let me know if you have questions, need crew, lodging, etc…  Already have 9 boats on board!
Chris (#483)

Eight races were run in a gusty northwesterly that saw several boats capsize throughout the weekend.  The seven boats from Asheville Sailing Club were joined by Barry and Rebecca (Carolina Sailing Club), Tim and Lucas Porter (#645, Lake Norman Yacht Club), and Tom Grace and Paula Pacheco (#717, LNYC).  A full recap and pictures can be found on the Jet-14 Class website. 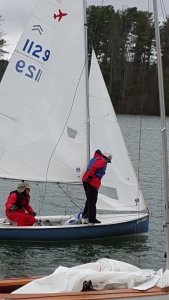 Five Jets were out on a brisk January day this weekend for the second Asheville Sailing Club (ASC) frostbite regatta.  Lenny Wells (#1130) serves as the Vice Commodore for ASC and organized a “Pursuit” style race, whereby boats with slower handicaps start first and the finishing order is determined solely by the place you cross the finish line.  On hand from the local Jet fleet were Connie Berchem and Teri Fosmire (#951, showing off some nice newer sails), Lenny and some hot shot kid, Chris and Paula Hennon (#483), newcomer Tanya Rodriguez with an enthusiastic young lady crew (#203), and Tom Grace and Paula Pacheco, who drove up from Charlotte for the weekend and raced in #1129, one of the all time classic Jets.

Although the racing was rather informal and there were no prizes, the Jets raced extremely well and all finished in the top 5 out of the 12 total boats racing.  A particular highlight was Race 2, where four Jets rounded the top mark together and battled their way to the finish as a tightly knit pack.  In Race 3, Lenny and the hotshot kid rounded first and gradually pulled away for a dominating victory – Lenny credited good crewman-ship and his new set of UK Sails, made by our own Connie Berchem.

The North Carolina scene has been maintaining momentum over the last few years and this year promises to bring more growth.  ASC has gone from 1 Jet to 7 in five years and we now regularly get 4-5 for every club race.  Fleet Captain Barry Saunders is doing his thing out east getting boats on the water.  This past year we welcomed newcomers Don and Rebecca Janeway (#1115) to the circuit.  For the upcoming season, we are planning on holding one regatta each month at venues like Asheville, Lake Norman Yacht Club (site of the 2013 Nationals), and Kerr Lake (Henderson, NC) and welcome travelers to each.

You’ve heard the stories, now plan on experiencing it first hand.  The 2016 SCC at Asheville Sailing Club will be held April 16-17.  This is small lake racing (think Mohican but 1/4 the size) defined, with lots of shifts, mystery puffs, and holes – and, a good amount of breeze, if past years are any indication.  Off the water activities are once again in the planning stages, but will likely include the Friday night social (aka “Darts Night”), a Friday afternoon golf tournament (tentatively called the “Barbehenn Beatdown”), and the Saturday evening catered BBQ at the lake.  Look for details in the coming weeks but plan now to come on down – Barney is waiting.  Contact Chris Hennon for details and info.

You might have heard that the Jet-14 class is returning to West River Sailing Club August 4-7 for the 2016 Nationals.  We’re making plans to get at least 6 boats there on the line.

Do You Have Fleet News?

Post news about your fleet here.  Just send the information to me and I’ll put out the newsletter, or feel free to go ahead and post to the Jet-14 National email list.

We are up to 36 t-shirts!  Good work.  50 sounds like a good round number, so if you are thinking about getting in on this hot deal, let me know soon.

We have 13 boats for the first Jet regatta next month, with a few more on the fence.  I have at least 3 able bodied, mountain hardened crew members looking to get on a boat.  So if lack of crew is preventing you from coming, I can fix you up.  Skill level of potential crew ranges from college girl with 420/Flying Scot/Jet experience to enthusiastic young kid on the precipice of adulthood eager to further his sailing education to a grizzled Flying Scot veteran who is one of the top 5 sailors at the club and wants in on some Jet crewing action.

It looks like we’re going to score a sponsorship from the local Wild Wing Cafe for a crazy party Friday evening (including darts and shuffleboard for you seniors) and dinner on the lake Saturday.  Stay tuned for details.

Here’s who I have so far (along with the opening Vegas line) – let me know if I can add you:

Our friend Connie Berchem (#203, #951) is undergoing heart surgery soon and has to miss the event.  Please keep her in your thoughts.

The 2014 Jet-14 racing season kicked off in fine style at the Southern Comfort Classic in Asheville NC.  Dave and Sue Michos (Edgewater Yacht Club) put on another impressive performance to defend their title for the second time. 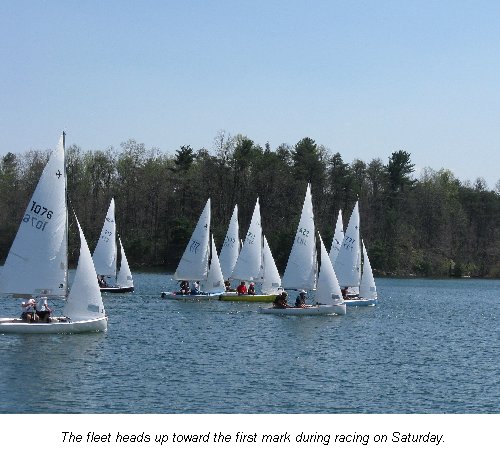 A detailed write up can be found here:

Next up on the schedule is the District III Championships at Severn Sailing Association May 17-18 in Annapolis.  I know that 3 NC boats are planning on racing on the Severn that weekend and there was talk of a couple of Ohio boats too.  For information please contact Eric Johnson.